As promised, for today’s post I’ve reviewed my ARC of Joanna Hathaway’s debut YA novel, Dark of the West. Unlike Alone Together, which I reviewed here, today’s novel is the first in a new YA series (called Glass Alliance), rather than a standalone text. The publication date has been pushed back, but I wanted to post this review now while the book is still fresh in my mind. This novel is set to be released on February 5, 2019, so I’m going to stay clear of any major spoilers. But, as always, a few details not included in the book blurb will be included in my three-part review. This is the last ARC I’ve had the pleasure to get my hands on, but I’ll be on the lookout for more opportunities to read and review other new YA reads.

Dark of the West

“A pilot raised in revolution. A princess raised in a palace. A world on the brink of war. Code Name Verity meets The Winner’s Curse in Joanna Hathaway’s Dark of the West, a breathtaking YA fantasy debut.

Aurelia Isendare is a princess of a small kingdom in the North, raised in privilege but shielded from politics as her brother prepares to step up to the throne. Halfway around the world, Athan Dakar, the youngest son of a ruthless general, is a fighter pilot longing for a life away from the front lines. When Athan’s mother is shot and killed, his father is convinced it’s the work of his old rival, the Queen of Etania―Aurelia’s mother. Determined to avenge his wife’s murder, he devises a plot to overthrow the Queen, a plot which sends Athan undercover to Etania to gain intel from her children.

Athan’s mission becomes complicated when he finds himself falling for the girl he’s been tasked with spying upon. Aurelia feels the same attraction, all the while desperately seeking to stop the war threatening to break between the Southern territory and the old Northern kingdoms that control it―a war in which Athan’s father is determined to play a role. As diplomatic ties manage to just barely hold, the two teens struggle to remain loyal to their families and each other as they learn that war is not as black and white as they’ve been raised to believe.”

Reader: When I began reading this book, I kept thinking about the novel As I Darken by Kiersten White, which I read last year as part of my reading challenge. Similar to that novel, there is so much worldbuilding in Dark of the West, which is told from the POVs of two teens that have very different perspectives on the same war due to their families and home countries. This novel starts off with quite a bit of exposition, since there are multiple countries to learn about, characters to meet, and conflicts to set up. Including the short prologue – which takes the reader into what seems to be a not so distant future moment in the story – was a great move on the author’s part, as that scene kept me going when the first few sections of the narrative had a slower pace than I hoped for when starting the book. Once the action really started, though, I was hooked. I’m not someone who loves a lot of setting description and exposition in my books (I couldn’t get through even a few chapters of The Hobbit), so if that’s something that doesn’t bother you or that you enjoy, feel free to ignore that small critique. Also, if you love to read political intrigue with a side of romance, or vice versa, than checking out this novel would also be a good decision on your part.

One other thing I want to mention before moving on to the next section of this review: I loved that this novel is told from two alternating points of view. Writing a novel in this way can be risky, as there’s the possibility that one storyline will end up being much more interesting than the other. In this case, the two POVs are balanced well, and I was invested in what was going on in both Athan and Aurelia’s lives. Hathaway also uses this narrative style to reveal information to the reader while the protagonists themselves remain unaware, which I love. This novel needed to be told from multiple POVs, in my opinion, and I’m looking forward to seeing how this element continues in future books in the series.

Teacher: As a novel that’s almost 500 pages long and ends on a cliffhanger, this book isn’t one that I would casually place in my syllabus. Without a doubt, this novel can be used to brilliantly teach literary terms like worldbuilding, POV, and narrative structure. Students would have so much material to analyze in connection to complex family, class, and gender dynamics. They could discuss war, secrets, love, death, sacrifice, amongst many other interesting and relevant topics. Romance is a major element of the plot, true, but by no means is this a novel that would only appeal to those readers looking for a love story. I would say that the war-torn and secretive world around Athan and Aurelia is given much more attention than their budding romance, so this novel is not one I would need to knock off my syllabus due to any worries about keeping  male students interested in the reading material. Any student interested in complex settings and/or multilayered storytelling is likely to find this novel appealing.

As a long book that can take a while to really grab the reader’s attention, I would not recommend its use in a high school or lower level undergraduate course. This novel is largely a set up for future books in the series, so it’ll likely leave many students feeling cheated that they put in the time to read this book in a couple or so weeks without gaining any closure by the end of the novel. If, however, you’re teaching an upper level or graduate level course, I would definitely recommend checking out this book as a potential required text. It holds a lot of opportunities for teaching literary concepts, and it includes enough material for multiple in-depth class discussions.

Fan: Like with Alone Together, there are so many side characters in this novel that could use their own stories. Servants, friends, or enemies, there are plenty of characters that fans can focus their attention on, creating works that consider these other perspectives on the war, Athan and Aurelia’s romance, and so much more. I also think this book can provide a lot of material for “what if this did/didn’t happen” fanfiction. “What if [spoiler] hadn’t been killed?” “What if [spoiler] found out Athan’s secret?” “What if [spoiler] was brought to justice for his actions?” So many tweaks in the canonical plot can have major ripple effects. And, of course, with no closure at the end of the novel, fans can create their own continuations of this book while waiting for the next installment. If fanfiction isn’t for you, then this novel has plenty of elements that can inspire fanart, as well. Aurelia is a princess and Athan is a soldier, and there are multiple countries and settings described in detail throughout this novel. Whether you’re into fashion, airplanes, architecture, or nature, there is plenty that can be drawn in response to this narrative.

If you love stories with a lot of worldbuilding, political intrigue, and romance, then definitely put Joanna Hathaway’s YA debut novel, Dark of the West, on your to-buy list. It’s currently set to be published February 5th, 2019.

Does this novel sound like something you’d enjoy? Is there another YA novel coming out soon that you can’t wait to get your hands on? If so, let me know in the comments below! 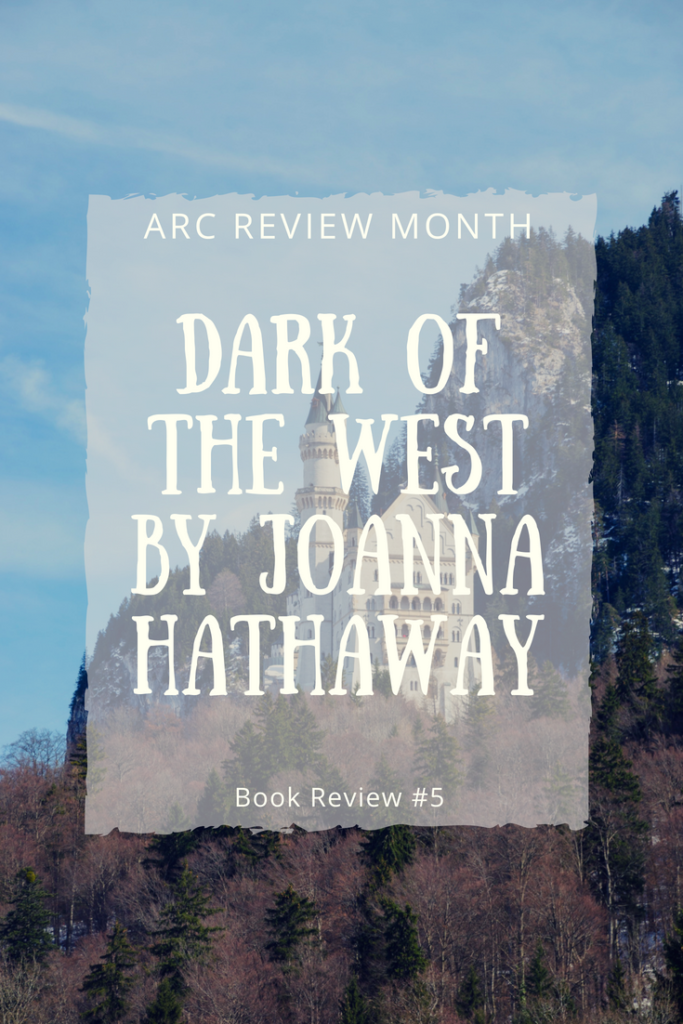